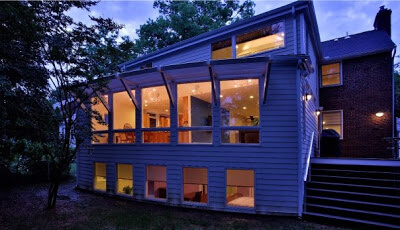 So, what is the future of home construction in Bethesda? Our office has been designing homes in Bethesda for the past thirty years and even we’re not completely sure. Certain trends do seem consistent across the country. Everyone seems to be gravitating toward sustainable or “green” design. And due to the economy, most people are re-prioritizing – staying put or deciding they don’t need as much house as they thought. But what is Bethesda’s future? This is something I think about often as both an architect working in Bethesda, as well as a local homeowner.

Relative to most other places in the country, we’ve been fortunate, as property values have remained fairly stable. And it seems very possible that the downtrend in home sales may have bottomed. My wife has noted several “Under Contract” signs around our neighborhood – even on homes that had been on the market for the last twelve months or longer. So, the question for local architects is, as the market rebounds, where will the next economic up-trend take the local construction market? I don’t know, but I have a theory.

One weekend, I was strolling my youngest son through the side streets around Whitman High School, noting the neighborhood’s beautiful tree lined streets and it’s mixture of colonials, ramblers and capes. All in all I thought, a pretty nice little neighborhood. And then it hit me – most of these houses were built during an era when people valued land over floor area – these houses are kind of small by today’s standards. That’s when it occurred to me that the future of residential construction in Bethesda just might be heavily weighted toward renovations and additions in its many similar subdivisions.

The simple truth is that a lot of these houses, though beautiful, no longer meet the average homeowner’s expectation for kitchen size, communal living space, bedroom and bathroom size, etc. And the population will probably continue to trend younger as baby boomers downsize and sell their homes to young professionals with kids – not unlike my family – relocating to the area for the consistent appreciation in property values, convenient proximity to DC and downtown Bethesda, and quality public schools. And the bottom line is this younger crowd of up-and-comers will probably buy these homes for the location and then modify and expand them according to their specific needs and modern norms.

So then, why will this lead to a spike in addition and renovation work versus knocking-down and building of new single-family homes? While new homes will undoubtedly continue to be erected – especially in so affluent an area – I think renovation and addition will increase dramatically for a few reasons. Primarily, new construction is more expensive. Another contributing factor may be new restrictions on lot coverage in Montgomery County for R-60 and R-90 zones.

As of April 28, 2008, lot coverage for these zones were reduced from 35% to 30%. This means that leveling your house or proposing a renovation that triggers infill restrictions, may reduce the amount of house that you can build, whereas if you maintain the existing home and add on, you’re still grandfathered in for your 35% lot coverage. This may not seem like a big deal, but as I stated early, floor area seems to be king these days. And even on a small R-60 lot of 6000 square feet, five percent can mean 300 square feet of lost floor area (that’s about the size of decent family room).

Finally, people may opt to add-on, rather than tear down, because, as stated earlier, a lot of these houses are attractive and may possess a character that the owner wishes to preserve. This is certainly easier and more cost effective than attempting to recreate these qualities in a newly constructed home.

In closing, I will only state that I have no supernatural powers that enable me to foretell the future. Whatever form the market takes, homeowners and architects alike in DC metro can consider themselves fortunate that the worst appears to over.